An 87-year old Marine veteran has been evicted and prosecuted for ‘feeding cats’.

It’s something Bill Richardson has been doing for a whopping 17 years at the very same apartment. The community cats came to know him, trust him and also, of course, rely on him.

And after nearly twenty years, he was forced from his home.

The poor man has literally sacrificed everything for those cats, taking care of them out of his own pocket, and plenty of nights went without much food himself just so he could feed his fur friends. 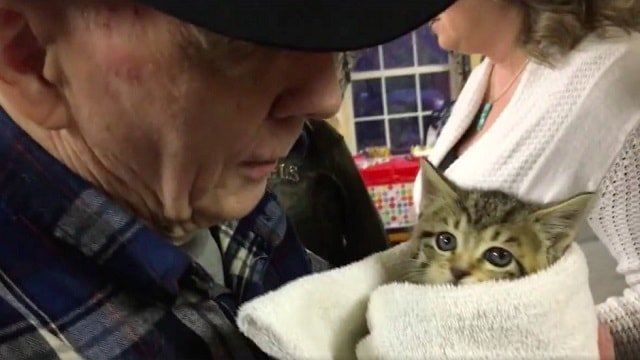 “He didn’t even have a pair of pants to wear to court (you know, to answer to the charges of having that unlicensed cat and, for good measure, the Township of Berlin, New Jersey threw in the charge of “maintaining a nuisance”– its way of prosecuting him for his outrageous deed of kitty feeding),” Lucy Noland of Fox 29 mentioned on Facebook.

Noland wrote a post, and people from all around the world literally flooded Richardson with support.

Here is what he wrote:

“Lori Sickel from J & Co Dog Rescue set up a YouCaring fund to help Bill with his kitties (his two personal kitties needed veterinary care and his community cats needed to get trapped, spayed or neutered and vaccinated). It also helped fund his forced move. Meanwhile, Ginny Chappel from Rescue Dogs Rock Animal Rescue set up an Amazon.com Wish List for all the things Bill never bought for himself because he was tending to his kitties– things like pants, socks, towels and dishes, but you came through with so much more. Within days, you had bought him a new vacuum, microwave, toaster oven, big screen TV, books, book cases, kitty trees and toys, food for Bill and his kitties and so much more. AMAZING!

The Preston & Steve Show on 93.3 WMMR’s Steve Morrison put out the all-call for people who needed barn cats. The Mac Fund’s Clare Morrison helped big time with the enormous project. You see, sadly, Berlin Township refused to allow Bill’s cats to remain– even as a maintained TNR’d colony. So when we moved him, we had to move his kitties who were in danger. Some are joining him right next to his new home, in his new town of Barrington, New Jersey. Mount Laurel Animal Hospital’s Dr. Chris Torre and South Jersey Animal Hospital’s Dr. Anil Gutta both stepped up big time and either provided medical care for free or gave us deep discounts (and we had a lot of cats to care for). NJ Aid for Animals was right there with us as well, helping with the cost of the spays and neuters.

The amazing volunteers with Barrington TNR and a small army of my friends (you know who you are), spent long nights trapping Bill’s cats, transporting them to the hospitals and caring for them. Barrington TNR also built the little insulated homes for the new cat colony that now sits right next to Bill’s new apartment.

And right now, Randalls Rescue has one of Bill’s formerly outdoor kitties, named Callie, who is sweet as can be and looking for her forever home. Anyone need a little more love in their life?

I could not ask for a better ending. From the bottom of my heart, I thank you. God bless you.”

Watch the heart-warming video below!