ENGLAND – A pet owner was left shocked after ‘her’ cat walked into her house just hours after she buried him.

Karen Turner, who is 50, discovered the body of a black cat on the side of the road the day after her beloved cat Sammy went missing.

As the cat had four white hairs on his chest – similar to Sammy – she presumed the cat was hers and then took the body over to her father John’s house in Radford Semele, Warwickshire.

Mrs. Turner decided to have Sammy buried right there at her father’s home because she feared her Jack Russell terrier Alfie might dig up the grave in her own garden. 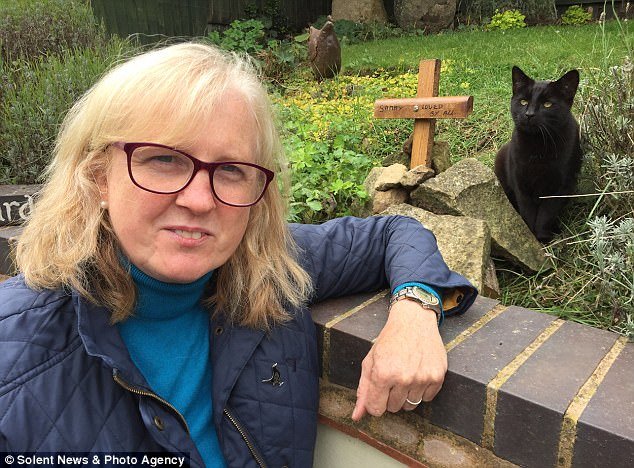 She and her father went ahead and created some rockery over the grave and marked it with a wooden cross bearing the epitaph: ‘Sammy. Loved by All’.

However, several hours later, her cat walked through her kitchen door at her home in Bishop’s Itchington.

Recalling the moment she found what she thought was Sammy by the roadside, Karen stated: ‘I was devastated.

‘The previous night was the first time in six years, since he was a kitten, that Sam had not come home.

‘Now I knew why and it broke my heart.

‘When I first turned that little body over and saw the white chest, I just knew it was my Sammy and my heart skipped a beat or two.

‘But I was on a lovely housing estate and had to keep myself together, so I couldn’t go bursting into tears.

‘By the time I got home I was numb, and I didn’t really know what to do.

‘Then I thought of my dad, John. He’s very kind and sensitive and I knew that if I lost it and broke down it would upset him terribly.

‘So I just kept my emotions in check and we did our best to make a nice resting place for Sam with a quiet ceremony.’

John went on to add: ‘I knew how much Karen adored Sammy so we had a quiet little ceremony, a few snuffles and tears and a final goodbye.’ 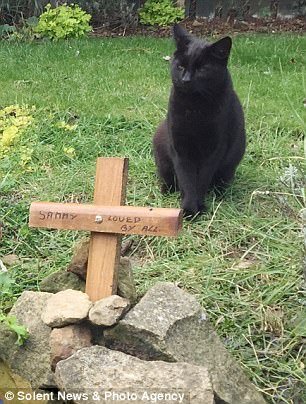 Mrs. Turner stated: ‘Back home I was really down, but managed to keep on top of things and kept myself busy.

‘I was also worrying about David [her husband] coming home and having to tell him the news because he’s as daft about animals as I am.

‘So when he came in the door I just fell to pieces and blubbed away for ages.’
The unthinkable then happened when Karen heard a scratching at the kitchen door – and in walked Sammy behind their other cat Jack.

She then said: ‘I didn’t know whether to laugh or cry. I was almost hysterical and found myself scolding Sam like he was a naughty little boy.

‘I was saying to him: ‘You are supposed to be dead. Where the heck have you been?’

‘It’s a real shock when suddenly you see your dear, departed pet come strolling back from the dead. It all seemed so unreal and crazy when he followed Jack through the flap.

‘I thought I was dreaming and imagining it, so I yelled for Dave. The look on his face too – he was so happy to see Sammy fit and well.

To track down the owner, she decided to scan the village’s Facebook community site for three days until a post appeared reading: ‘Has anyone seen a beloved black cat missing for four days….owner terribly upset.’ 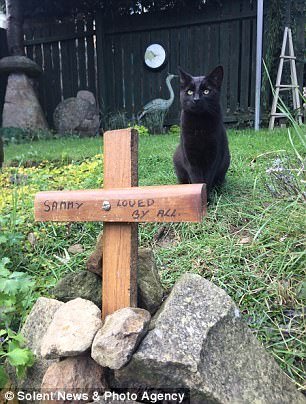 Pensioner Lister De Lara Taylor, who resides in the same village, was missing nine-year-old Maurice, and so Mrs. Turner had to break the news to her on the phone.

She stated: ‘My dad said she would be welcome to visit and see the lovely little shrine we’d made for her pet.’

John stated: ‘It was a very strange experience. I wrapped the little creature in a shroud and we returned it to its home and owner.’

Mrs. De Lara Taylor admitted she was extremely grateful for the send-off given to Maurice, but was happy to have found him.

She stated: ‘I was so sad, but when Karen told me the lengths they had gone to, giving my lovely boy such a decent sent off, I was extremely moved by their kindness.

‘I gave Karen and her father my most heartfelt thanks.

‘Now Maurice is with all his friends, all my other pets, and I am so grateful.’