Does a talking cat exist? Obviously, no. Although cats are intelligent creatures, they can’t talk like humans. You’ll always find a person or two claiming that cats can talk, and although it’s been revealed that they can communicate to some extent with humans, they can’t talk. At least not in this universe. Things are completely different in Rick and Morty’s crazy world.

The hugely popular animated show that follows the adventures of crazy scientist Rick and his nephew Morty has just returned with a fourth season after a lengthy spell on the sidelines. Among the plethora of new crazy characters, there’s also a talking cat. To make things even more compelling, the cat harbors a dark secret that we have yet to learn. We don’t know what it is, but it’s so horrifying that the mad scientist who has seen everything in his life nearly shot himself to the head.

A lot of mystery surrounds the Rick and Morty season 4 talking cat, including the fact that it can talk. While on a trip to Florida with Jerry and the unique cat, the duo decided to find out and took a look inside its mind. That’s when Rick nearly shot himself, emphasizing the seriousness of the dark secret hidden away in the cat’s mind.

Why Can the Cat Talk?

There are many theories as to why the Rick and Morty season 4 talking cat can talk. The most obvious one is simple – it’s a crazy world out there and talking cats are kinda the normal. Some think that creators Dan Harmon and Justin Roiland are just trolling their fans. Others, however, believe that the talking cat, a character we’re not supposed to like, is a jab at the creators of others shows that complain about toxic fandom.

One thing’s for sure – Harmon and Roiland have left dots to connect and a bag of theories buried deep in their funny show. Rick and Morty might be an animated show with a cat that talk, but underneath it all, it’s a much more complex critique of society and many other things.

The talking cat Rick and Morty is just another unique addition to the excellent Adult Swim show. The cat appears suddenly and unexpectedly in season 4. Rick describes it as an abnormal and unrelated event. There is a reason why the feline talks – he’s just ashamed to reveal it. While the cat doesn’t want anyone to ask him about its ability to speak, he constantly brings it up. It’s like the Rick and Morty season 4 talking cat wants to get something off its chest, yet it’s kind of afraid to.

What Jerry and Rick saw inside its mind is anybody’s guess. By the end, Jerry pukes on the ground and Rick, who has seen a lot of bloodshed and everything else in the universe, is shaken to his core. 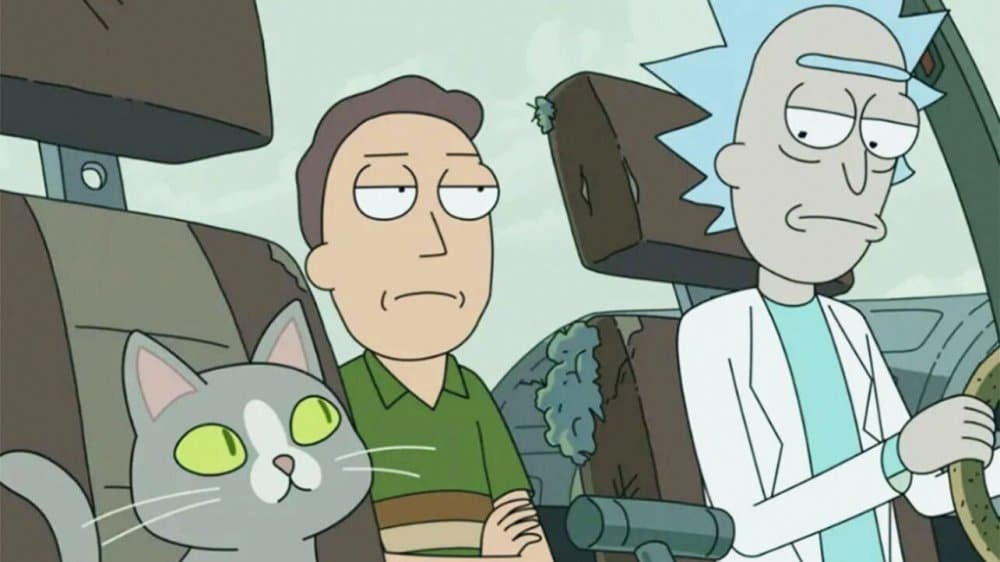 What’s Hiding in the Mind of the Talking Cat?

Well, we’re not sure. Just like many things that will remain mysterious in Rick’s crazy world, the Rick and Morty season 4  remains a mystery that we’re quite eager to solve. Users on Reddit are posting theories non-stop and some of it might be true. We know that the show’s creators like to mess with their fans’ minds and put characters in the show that are seemingly out of place.

In the talking cat case, however, the mystery goes deeper. What could be hiding in a feline’s mind that was so bad that it made Rick, a war criminal and the most dangerous person in the universe make him want to kill himself. Jerry was always weak so it’s not a surprise that he puked. But, Rick? The cat that talk [1] is obviously hiding something big.

We’re halfway through season 4 with 5 more episodes set to premiere in 2020. The ongoing COVID-19 virus pandemic is only making things worse right now. It has shattered half the world and halted production on numerous shows, Rick and Morty season 4 included. As it seems, it’s going to take a while before we learn the dark secret the talking cat has hidden deep in its mind.

This is kind of a complex answer. In the most literal sense of talking, no, you can’t discuss the weather or politics with your cat. On the other hand, while there’s no cat like the Rick and Morty season 4, science has long wondered what cats are trying to tell us.

Studies have revealed that while cats obviously can’t talk, they have a way of communicating with their owners. Those meows are just cries for attention. Your cat is trying to communicate with you. Although the studies are pretty small in size right now, they prove that cats are much more intelligent than we’ve ever thought.

Of course, you shouldn’t get your hopes up to find a creature such as the talking cat Rick and Morty. And it would be best not to. Who knows what’s going on in the mind of that demon.