Good Samaritans certainly do come in all kinds, so it was with her good heart and sympathy for the deformed and sickly kitten that a homeowner in Elkhart, Indiana, picked up this poor pitiful kitten who had wandered into her yard. It was difficult to believe that the little kitty was all alone in the world, and he probably wouldn’t have survived if he hadn’t been rescued when he was. 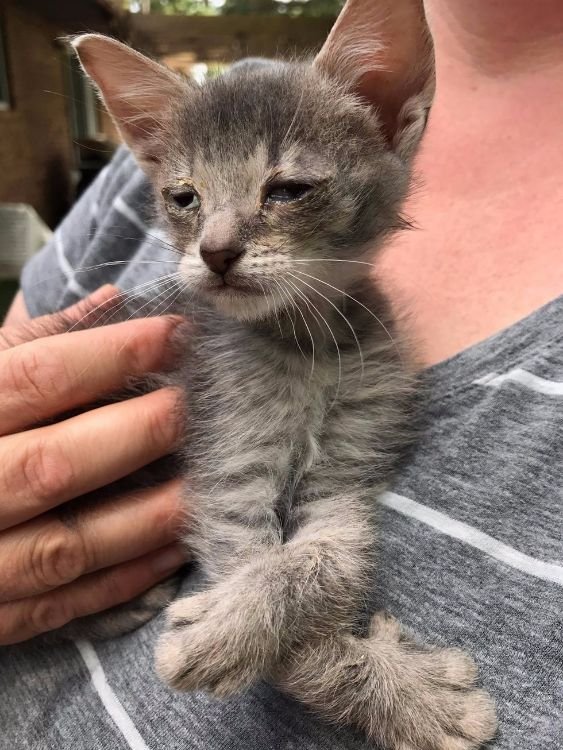 The kitten had a terrible eye infection stemming from a cold. However, the worst part was his tiny legs, which made his little feet turn inward so badly that he needed to walk on his arms. The kind lady who rescued him knew she simply wasn’t capable of giving him the help he so desperately needed. 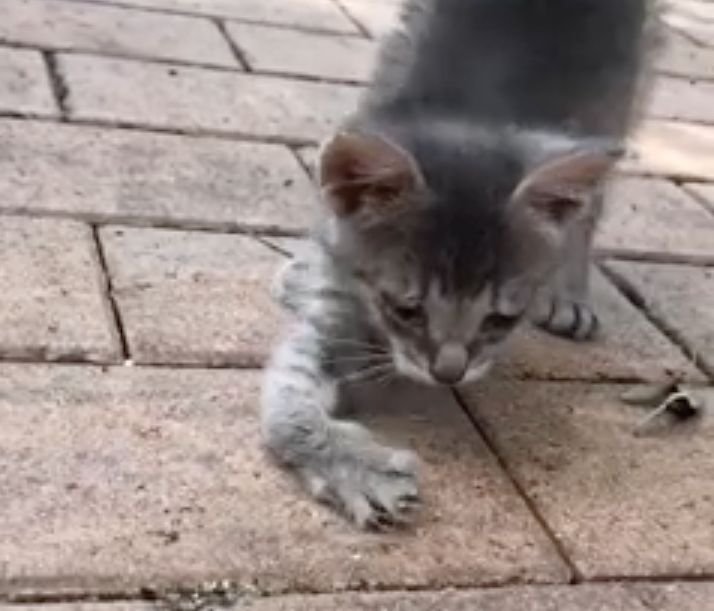 That’s when Here Kitty Kitty Rescue came in to assist. They were absolutely amazed that Scooter, as they named him, had survived on his own at such a young age. It would have been quite a feat for a healthy, normal kitten, not to mention one with such a severe deformity. 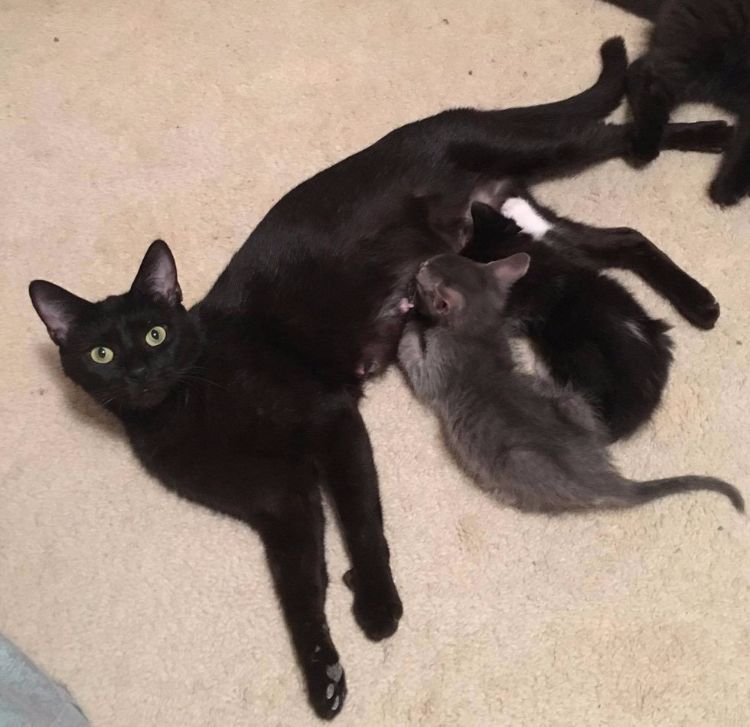 Purring up a real storm, Scooter obviously has a strong will to live. The rescue happily took him in and got him settled with a foster mom, Avery, and her own four kittens. 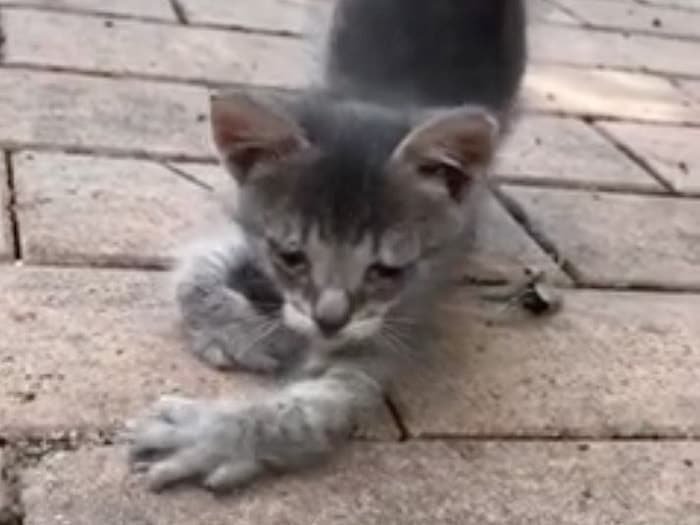 Although Avery’s babies are about four weeks younger than Scooter, they all weigh the same.

“It looks like Scooter was born with shortened or tightened ligaments/muscles on both his front feet. This is what caused his feet to turn in and make him walk funny,” the group went on to say. 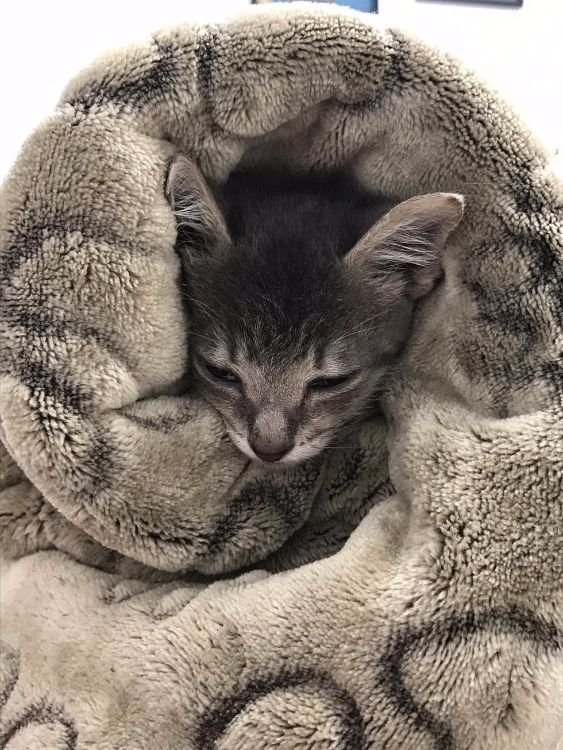 The bone growth in Scooters feet and legs has actually been affected because so much time has passed. He will definitely require extensive therapy and manipulation of his feet to be able to walk normally. Surgery will be the next step, however, because he is so small, it won’t happen for some time. 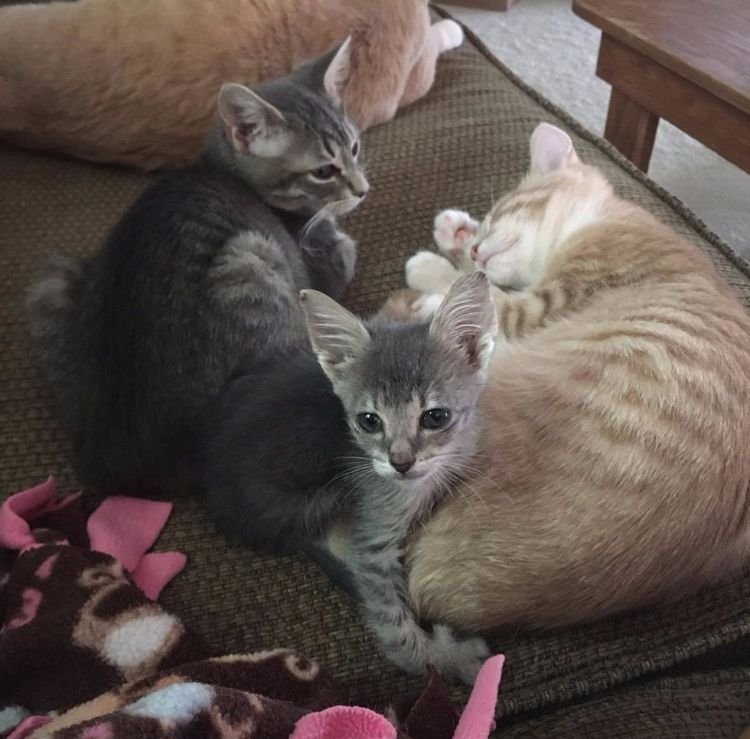 Meanwhile, Scooter is much happier in his brand new home. The antibiotics given to him did manage to clear up his cold, and he is gaining weight and still growing. He greatly enjoys playing with toys, snuggling with his foster siblings, and being held and petted by the folks who took him in. 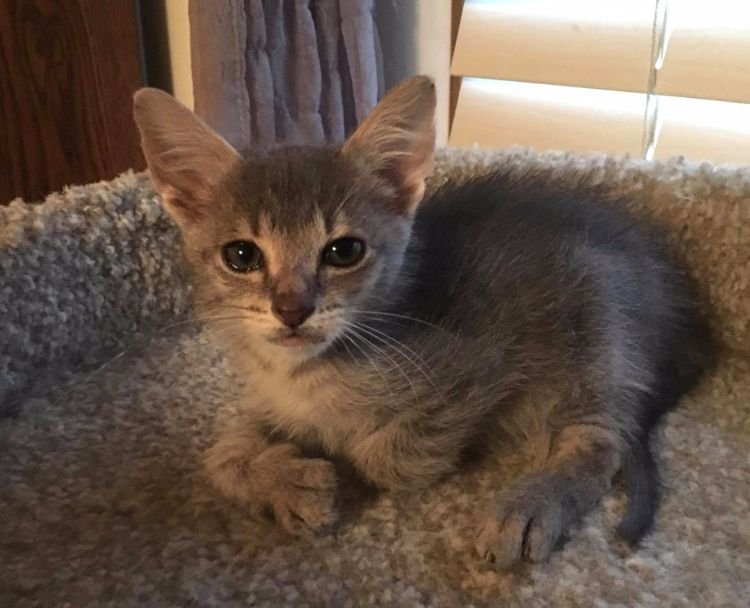 Scooter has a brand new outlook on life. Just knowing how loved you are can do that for anyone, and the little grey kitty is no exception. All thanks to a Good Samaritan who took it upon herself to take the extra steps and make a real difference for this kitty!