IRELAND – A lost cat has successfully been reunited with his owner after turning up in England 18 months after disappearing from his Belfast home.

She traveled over just a few days ago to be reunited with him.

Exactly how the cat, whose name is Danny Boy by his rescuers, arrived on Merseyside is completely unclear.

“We’ve absolutely no idea how he got to Liverpool,” Julie explained to the Belfast Telegraph.

The dark gray and white cat was seen near a busy road last week trying to get left-over food from a takeaway. Locals said he had been there for many weeks. 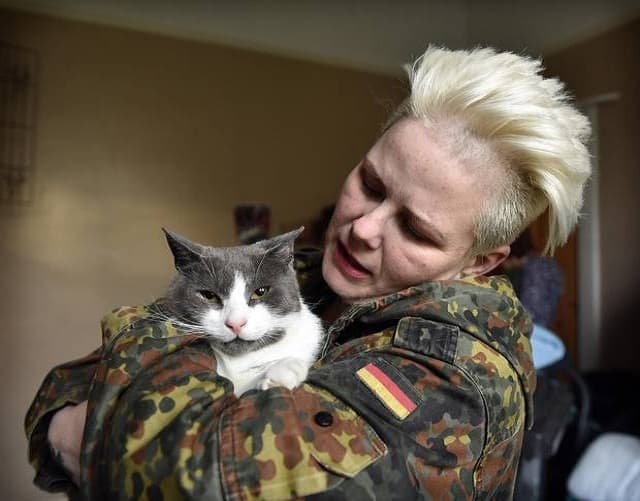 Rachel Foster, who is a volunteer with Garston Animal Rescue, a charity which looks after abandoned animals, picked the stray cat up.

Strangely, even though they did not know he was from Northern Ireland, staff nicknamed him Danny Boy.

After looking for his microchip, they were astonished to learn his owner was from Belfast.

Despite being missing for a total of 18 months, the cat was very healthy.

“I’ve had him since he was a kitten, but he disappeared about 18 months ago and I assumed the worst,” Julie stated

“Then a few days ago I got this lovely phone call out of the blue to say the cat had been found.

“I think they presumed I had moved to Liverpool.

“I had noticed the caller had a bit of an accent, so I asked where she was from, and she said Liverpool – I couldn’t believe it.”

Julie took the ferry over a few days ago to collect the cat and bring him back to Belfast.

She explained that she wanted him back immediately, no matter what it would cost.

“To get a call to say he had turned up in Liverpool was just brilliant,” she went on to explain.

“I wouldn’t allow the charity to re-home him. I wanted him home, absolutely – whatever it costs. I got the boat over yesterday to collect the cat and am coming straight back.”

Julie is a huge animal lover and is involved with a charity in Belfast that rescues Cavalier King Charles spaniels. She even used her unexpected trip to Liverpool to transport over two dogs, Bella and Jasmine, to meet up with their new owners.

“I do rescues, and I know that anything is possible,” she said. “I’ve another cat who I call Lagmore Larry because he was found in Lagmore and he disappears from time to time. A while ago he disappeared for six months and turned up at Crumlin Road Gaol.”

She is completely mystified as to how her other cat ended up in Liverpool.

“I’m presuming that he went missing in Belfast and some nice family rescued him and didn’t think to check his chip.

“Perhaps they moved to Liverpool and took him with them – I really haven’t a clue.”

Nancy Lindsay, who is the trustee and founder of Garston Animal Rescue, said it was possible the cat had sneaked onto a lorry bound for England.

“We got a call to say that there was a stray cat hanging around on the busy Speke Hall Road trying to get left-over food from a nearby takeaway and that he’d been there for some weeks,” she said.

“So one of our volunteers, Rachel Foster, picked him up for us and got him to safety.

“We got him settled in, fed him and gave him a comfy bed for the night.

“We called him Danny Boy and thought no more about it. We were just glad that he was safe and away from the traffic.

“We then checked him to see if he had a microchip, so then we’d be able to reunite him with his owner.

“To our astonishment, we found that his owner lived in Belfast. Julie was just as shocked as we were to find that he was safe and well, and somehow he’d got himself to Liverpool.”

Nancy went on to add that staff was looking forward to reuniting owner and cat.

“We keep telling him that his mum is coming for him, just as soon as she can get a boat over,” she said.

“But how he got here – and when – is something that only Danny Boy knows. And so far, he’s not telling us.

“We’re happy and glad to be able to get him back to his home, safe and sound. Everyone here has fallen in love with him. He’s such a gorgeous, friendly cat.”