PENNSYLVANIA – Heather Miller’s job is to be the office manager at Champlain Valley Veterinary Services, however, everyone knows Elsa the cat is really in charge.

Elsa was adopted about a year ago through Lil Cassidy, who is the founder of Animal Rescue and Welfare Services, just before the long-haired beauty was seemingly destined for euthanasia.

Two previous attempts to find her a suitable forever home failed, Heather stated, mostly because of a kidney problem Elsa had where she wouldn’t urinate in a box.

However, with the proper medication and plenty of litter boxes scattered about the Route 3 building across from Consumer Square, Heather explained that the cat “has been a doll here.”

After the former office cat, Fern, sadly died, the staff was quite uncertain if they wanted to bring another in so soon.

However, they saw Elsa and couldn’t resist.

“She was almost frozen to death when they brought her,” Heather stated.

“Somebody just left her out there to freeze to death.”

“That’s why they named her Elsa — because she was pretty much frozen.”

“She just kind of jumped into our laps,” she said. “We were her last-ditch effort, and I think she realizes this is her last home.”

And to show her gratitude, the tortoiseshell-colored beauty has made herself quite useful.

Elsa drapes herself across the reception desk just in case someone coming in has an undeniable urge to pet a cat, she assists clients in paying their bills by grasping at the pen while they write a check, and she also signs off after reviewing Heather’s work by leaving tiny teeth marks in the corners of the office paperwork. 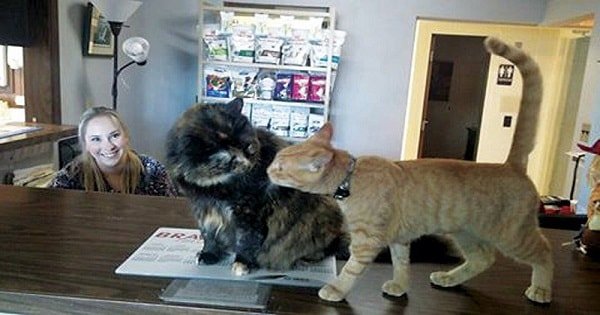 “She thinks she owns the place,”
joked receptionist Sheila Drown. “She’s our official greeter. Usually, she’s up on the counter in people’s faces.”

She is also a quiet companion to dogs who are in distress too big to fit in the private examination room reserved for euthanasia as they exchange their final and touching goodbyes with their families.

Heather explained the last time the staff had to end a dog’s life this way, she actually apologized to the distraught owner because Elsa was there.

“The client stated, ‘No. let her stay. She’s helping.” 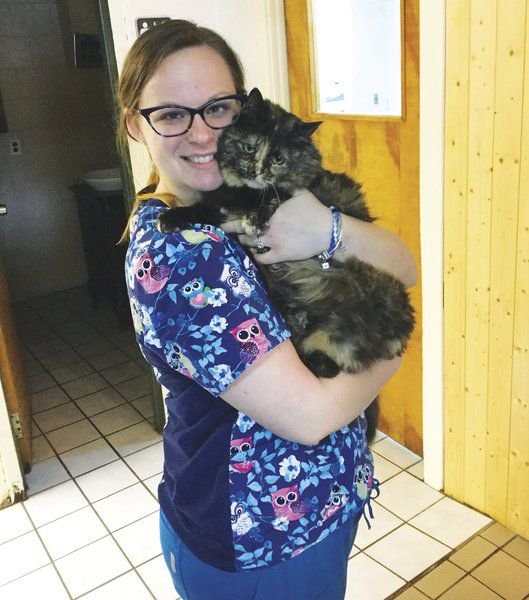 When she’s not working, Elsa curls up on a plaid blanket in the reception area and makes herself available for a weekly brushing from receptionist Chloe Brady or to alert someone that her dish needs to be refilled with fresh water.

“She’s got us all trained,” concluded vet tech Rebekah Sessums, hurrying off to complete the task, dish in hand.