You would think this senior kitty would probably want to spend a lot of time alone, sleeping. But not this cat, not Dexter! 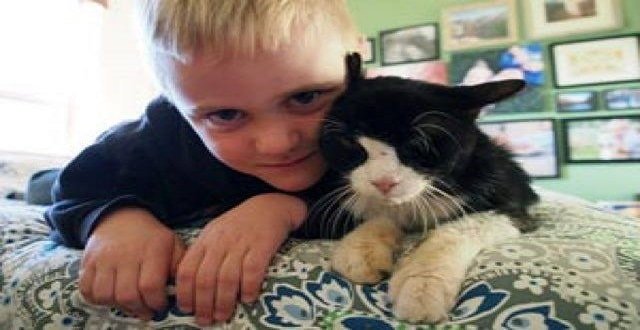 As soon as Dexter arrived at his new home, he totally and completely took to the young boys within the family unit, frequently seeking them out for snuggles and cuddles.

“As soon as Dexter came home, he took to the young boys, frequently seeking them out for cuddles. Even when the kids are playing loudly”, Dexter wants to be right on the floor beside them, his tail wagging like a dog, Williams explained.

She also went on to say that Dexter likes to sit with his head in their laps while the boys are playing with Legos or with cars. This super snuggler of a tuxedo cat is never happier than when he’s with his new humans.

And in turn, they feel the same way “I love this cat so much; I’ve never had a cat who was this friendly,” stated Williams.