Pressing the Head Against Objects in Cats

No, that doesn’t mean it’s time to grab a camera to take a picture of your cat for Facebook thinking it’s funny.

Head pressing is characterized by the compulsive act of pressing the head against a wall or another object for no reason. This generally indicates some damage has been done to the nervous system, which may result from any of a number of causes, including prosencephalon disease (in which the forebrain and thalamus parts of the brain are damaged), or toxic poisoning.

Neither the age nor the breed of the cat matters. Head pressing is a serious signal that there is something very wrong with your cat and he or she needs to be seen by a vet immediately.

The act of head pressing is only one sign of prosencephalon disease, in which the forebrain and thalamus parts of the brain are greatly affected. Other symptoms which may accompany this include compulsive pacing and circling, changes in learned (trained) behavior, seizures, damaged reflexes, and some visual problems. Some of these symptoms can lead to lesions, for example, sores on the paws as a result of compulsive pacing, or injuries to the face/head as a result of pressing the head against a surface for extended periods of time. 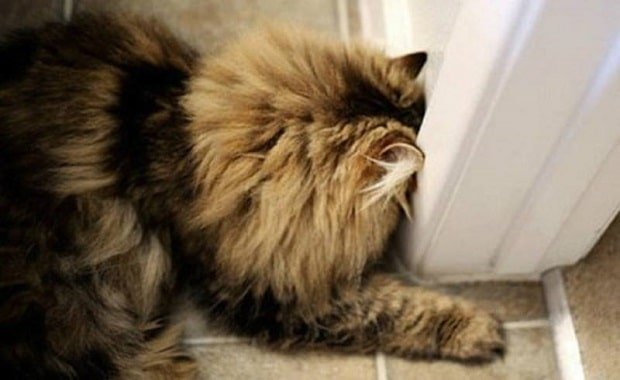 There are a number of reasons why a cat may feel the need to press its head against objects. Possible causes may be a metabolic disorder, such as hyper or hyponatremia (too much, or too little sodium in the body’s blood plasma), a primary or secondary tumor (meaning a tumor located in the brain vs. a tumor located elsewhere in the body), or an infection of the nervous system, such as rabies or some fungal infection. Other causes can include head trauma, such as from a car accident, or from exposure to certain toxins, such as lead. 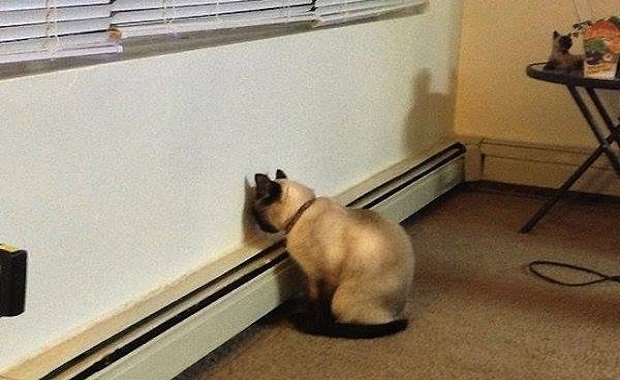 One primary diagnostic procedure in cases of head pressing includes a fundic examination of the retina and other parts of the back of the eye, which may indicate infectious or inflammatory diseases, as well as reveal irregularities in the brain. Other possible tests are blood pressure measurements to test for high blood pressure, and computed tomography (CT) or magnetic resonance imaging (MRI) scans of the brain. Your veterinarian will most certainly include a urine analysis (which may reveal a problem with the metabolic system), and tests for blood lead concentration (which can indicate toxins in the system).

You will need to give the vet a thorough history of your cat’s health, the onset of symptoms, and possible incidents which might have preceded this condition.