Ann Bosche was out taking her Dachshund Gracie for the last walk of the day. While out on the walk, Gracie broke the quiet of the evening barking furiously at something in the bushes. Ann explained to Care2.com. 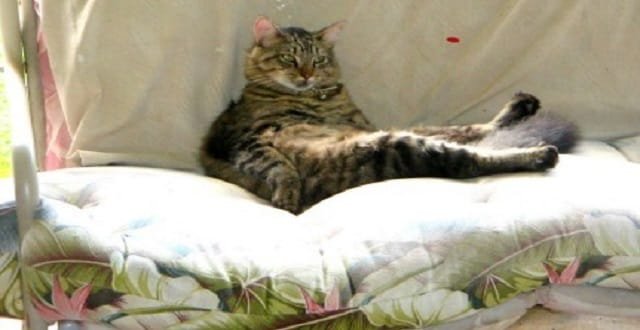 “We get several dogs and cats dropped off in this neighborhood so I figured this was another one,” Ann explained who welcomed the brand new visitor with a soft voice.

“What came out from under that bush was a large, beautiful cat with a white tip on his tail. I said, ‘Aren’t you a fancy thing?”

Ann had two cats of her own, so she went home for some food.

“He was skittish and backed away while I placed the bowl under the bush. He ate, said his good-byes and left. The next night, he was back again.” 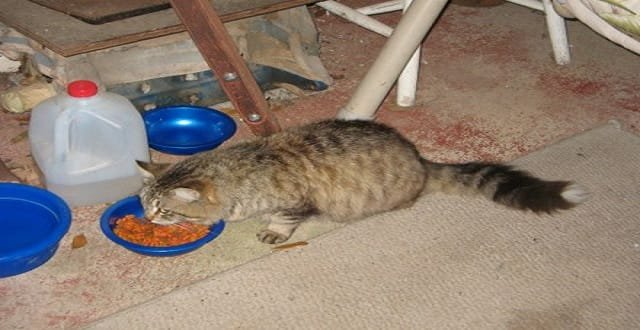 With just a bit of coaxing from Ann, Mr. Fancy soon became bold enough to wait on Ann’s porch each morning and evening

Ann’s husband felt a dog and two cats were more than enough for their house and Ann reluctantly agreed to take Mr. Fancy to the shelter to find a forever home.

As the shelter attendant returned the carrier, he explained to her that Mr. Fancy was banging his head against the cage door inside.

Ann admitted she cried all the way home.

Ann kept checking the shelter’s website for his adoption photos just hoping to learn he had found a home. She never saw one and hoped that meant he had managed to find a home quickly.

What actually happened could not have been more different!

Mr. Fancy found a way to escape the shelter only 20 minutes after Ann left.

Exactly one month later, Ann was surprised to hear voices at her house at 5:30 in the morning. 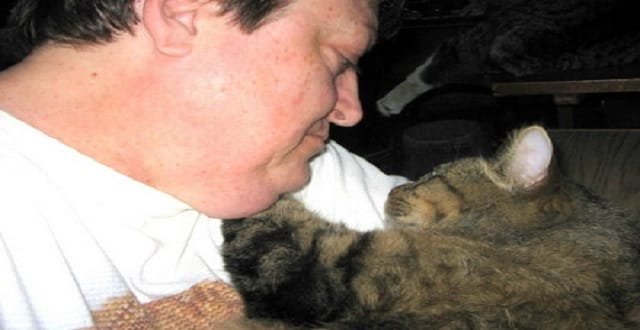 Ann stated. “I got up to see and what I found was nothing short of a miracle. I saw a cat, sitting at my husband’s feet, talking to him. I kept trying to focus on the cat and when he flipped his tail around, I saw proof. There was the white tip. I started crying and quietly said ‘Oh my baby, Hi Fancy.’ He turned, saw me and ran to me, talking and squealing the whole way. I truly think he was saying ‘I found you! I’m home now.’”

Her husband should have known any objections surely would have been very futile at this point. These two were destined to be together!

“I think he had a guardian angel looking out for him, directing him back to my house. I love him so much and feel we were meant to be together. He belongs here. Mr. Fancy will never want for a home, food or love again.”