DIXFIELD, MAINE — Brenda Jarvis crouches inside a weathered trailer and tosses plates on the floor just like she’s dealing a deck of cards. It’s lunchtime, and more than a dozen cats come scurrying from out of nowhere for food.

It’s a labor of love, one that Jarvis and her sister, Caroline Smith, started a whopping 40 years ago with a few abandoned cats that over the years became hundreds. Since then, they and other self-proclaimed “cat ladies” have made this trailer and this town somewhat of a huge magnet for unwanted felines. The cats have the run of the trailer; the women live elsewhere.

Their effort appeared to get a big boost when Barbara Thorpe, a longtime resident, left the bulk of a $197,000 estate to Dixfield’s abandoned and unwanted cats when she died back in 2002, but only $3,000 has come to the cats since then the women’s attorney says. The cat ladies of Dixfield, as well as the town itself, are fighting back, suing the trustees as a part of a legalistic cat fight.

“This charade should not be allowed to continue, and the cats must get their inheritance without further delay,” Seth Carey, the women’s attorney, wrote in a formal motion filed at Oxford Superior Court.

In the minds of the trustees, the suit is frivolous. The statute of limitations has expired, the women are not named in the will, and there is absolutely no timetable for payments, according to Neal Pratt, a Portland lawyer who represents the trustees, one of whom was Thorpe’s longtime housekeeper.

So far, according to Carey, that “discretion” has resulted in only small, sporadic payments coming from the money left by Thorpe, whom Jarvis describes as a childless, well-respected nurse who loved Siamese cats. 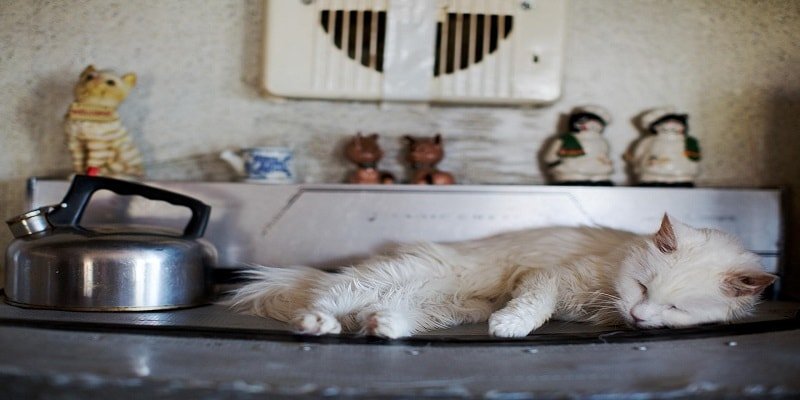 Recently, Maine’s attorney general, Janet Mills, has also joined the pending suit as part of her office’s oversight of nonprofit charitable organizations. Mills said her interest is simply to find answers and resolve the case as quickly as possible.

Before its appearance in Superior Court, the issue had languished for eight years in Probate Court but with no clear resolution.

Inside the cat-filled trailer, where Jarvis’s parents had lived, the legal sparring seems to be too far away. Instead, this long, narrow space is a purring, lounging, climbing, claw-sharpening tableau of fuzzy contentment.

The five women take turns keeping the trailer clean and the cats fed and happy. They also keep some cats in their own homes. One of the women, Valerie Warriner, cares for 47 of them.

“I can’t even tell you why I care so much for the cats. I just do,” stated Warriner, a disabled Air Force veteran.

The women laugh quite easily at the stereotypical image of “crazy cat ladies,” although they concede that their passion goes above and beyond any stereotypes. All the cats are spayed /or neutered, their bowls are washed regularly, and the trailer’s laundry is done every day, said Jarvis, who doesn’t mind at all shoveling snow from the roof with her 74-year-old sister.

The sisters estimated that the two of them alone have sheltered in upwards of 600 cats over the years. A sign in the trailer’s kitchen reads: “Cats leave paw prints on your heart.”

“They can do anything they want here,” Jarvis said of the cats. “I pay the bills, but it’s their house.” She estimated that $500 of her monthly $763 Social Security goes directly to care for the kitties. 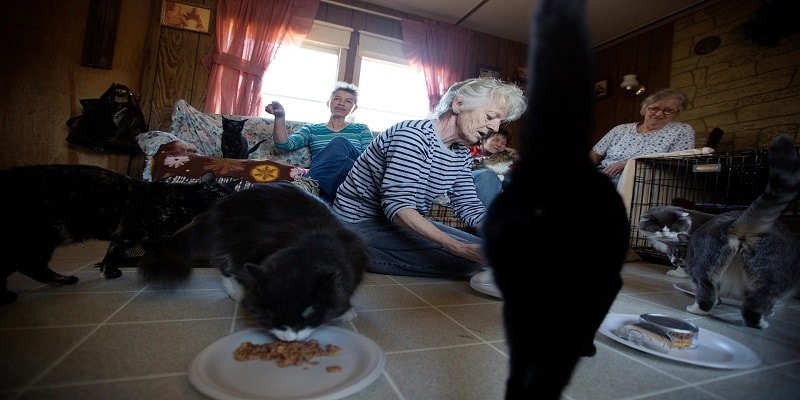 Like Jarvis, the rest of the women said they steer a significant portion of their incomes also toward the cats.

“I spend more to feed the cats than I do to feed me,” stated Donna Weston, a 60-year-old electrician who also pays all the vet bills for the trailer cats.

Weston and the others insisted that they do not regard the Thorpe estate as some personal ATM.

“It’s all about the cats,” Smith went on to say.

Those cats include Sam, a 22-year-old who enjoys the warmth of an aluminum mat draped over a stove’s pilot light. There’s also Inky, Sophie, Bandit, Monty, and tiny Queen, who is a stunted 9-month-old who stopped growing shortly after birth.

The women are known throughout this mill town of 2,500 people which is about 75 miles north of Portland, and many families who no longer can or want to keep cats bring them over to the trailer. Sometimes, they are placed inside the door. Other times, they are unceremoniously dumped nearby.

Once, Jarvis recalled, a cat was thrown onto the trailer’s lawn at Christmas from the window of a pickup truck that was in motion.

“The cat just stood there,” Jarvis stated. “It seemed to be asking, ‘Where am I? What did I do wrong?’ ”

Jarvis, who has been married for some 44 years, said her husband has never had dinner at home. Not all all, not once. Instead, they stop at the trailer each night, where Jarvis checks on the cats.

Day after day, night after night, Jarvis and the other Dixfield “cat ladies” care for these animals that otherwise might be euthanized or simply die outdoors. It’s a mission they pledge to continue for as long as they are able — with or without the trust mmoney.

“Whether we get it or not, we’ll continue to take care of the cats,” Weston stated.

Jarvis nodded. “I’ll be doing it with a walker,” she concluded.