A New Jersey boy attempted to rescue his family’s kitten from a tree Friday morning, but then needed to be rescued himself.

After 10-year-old Aashir Alauddin spotted the cat, whose name is Alley, in a tree outside his home in Hackensack, he stepped onto a high chair and then proceeded to climb about 18 feet to reach the 2-month-old pet, CBS2’s Jessica Borg reported. 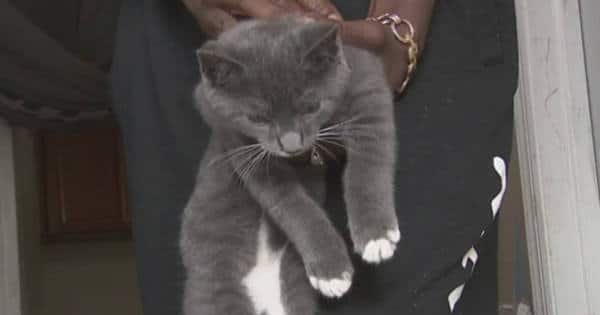 The tree is approximately 35 feet high, and it was pouring rain.

“He got the cat and couldn’t get down, so I was telling him, ‘Put the cat inside your shirt and come down,’” stated Aashir’s mother, Linnette Wheeler. “But he was like, his shoe was going to slip, so I immediately called the Fire Department.”

And then crews came to help.

A photo snapped by John Ingallinera, deputy chief of Hackensack Fire Department Engine 2, shows the ladder propped up against the house and Aashir’s feet in white sneakers just resting on the thin branches. 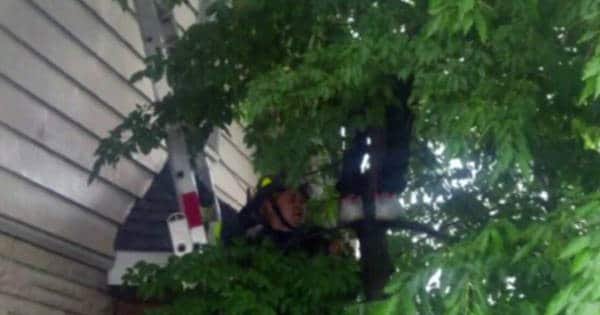 Firefighters receiving a call about a cat in a tree is actually nothing new. This time, however, it was a young child chasing a cat up a tree.

“Very unusual,” Ingallinera stated“We rarely will get a call like this.”

Aashir was stuck up there for about 20 minutes.

Experts advise leaving the rescues to the kitties themselves. Most of then will eventually jump down on their own, they say.

What a great kid!