Although dogs are actually pack animals and cats are social creatures, introducing new pets to the family’s other companions is very often a very delicate process. Family pets can be very territorial, or two animals simply may not get along for one reason or another.

These were a few concerns that crossed 24-year-old Phoebe Gill’s mind when she fell in love with Stitch, who is a one-eyed cat in need of a forever home. In just nine months of life, the Sphyx kitten had already suffered her share of trauma. Gill wanted to make sure that her dog, Alaska, would welcome her into the family with a completely open heart.

I've had a tiring day of mostly napping and looking cute. Although my parents did go crazy this evening and try and give me a bath! It was horrible and I showed them by making lots of angry noises and I'm sure I taught them a lesson and they won't try that again! Although I'm sure I did hear them say something about me having to get used to them… I hope not! Anyway, I'm off to play 🐾 #sphynx #sphynxcat #kitten #bath #baby #wrinkles #bald #hairless #hairlesscat #rescue #adoptdontshop #adopt #photooftheday #animalsofinstagram #pet #petsofinstagram #cute #beautiful #love #catsofinstagram #catslife #cat #girlswithtattoos #nails #nailporn #cuddle #sphynxlove #nakedcat #nudecat

“She had an injury to her eye, which would have been cured with medication but her breeder didn’t take her to a vet,” Gill wrote of Stitch, according to a story done by Bored Panda. “When it got worse, the breeder gave her up and the vet took her in and did the surgery to remove the eye, as it was too late to be saved.” 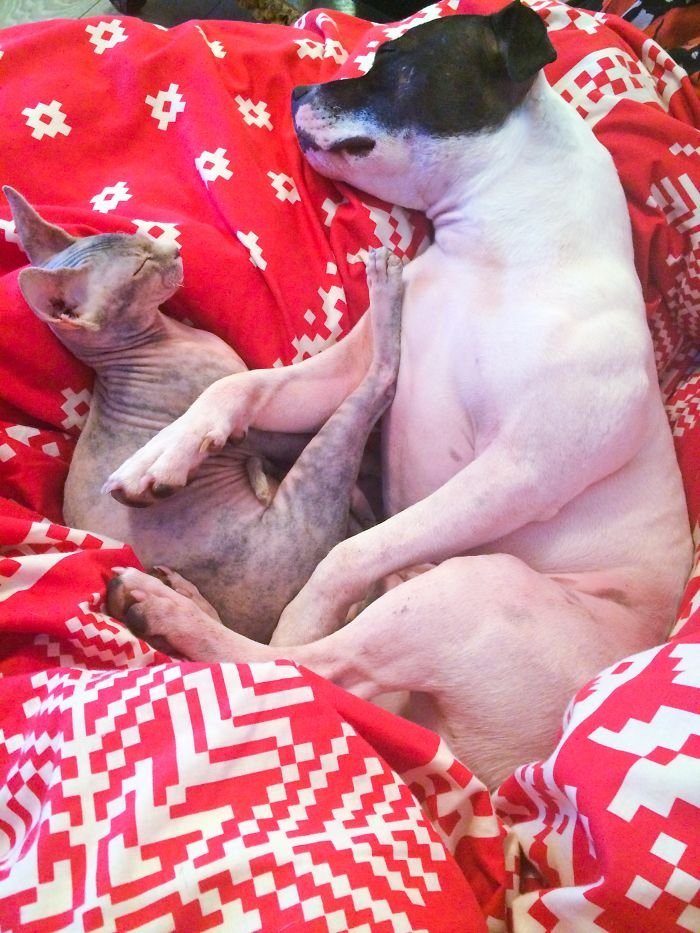 However, despite the kitty’s small handicap, Gill desperately wanted to adopt Stitch, referring to it “love at first sight.”

Although the animal lover was quite sure that she and Stitch would get along just fine, there was still one huge question in her mind: How would Alaska handle the new addition?

I'm feeling more comfortable in my home with my family now and my parents say my personality is starting to really show. I think my favourite part of the day is when they feed me those yummy treats and when I get lots of kisses on my face 😻 (which is most of the time) It's nearly bedtime for them, which means it's playful for me! Off I go to cause mischief 🐾 #sphynx #sphynxcat #sphynxbaby #sphynxkitten #kitten #catsofinstagram #kittensofinstagram #nude #nudecat #bald #stitchtherescuecat #rescue #adoptdontshop #adopt #wrinkles #beautiful #cute #cat #cats #catstagram #instasphynx #sphynxlair #catstagram #pet #animalsofinstagram

Thankfully, the dog and the One-Eyed Rescue Cat Finds A Purrfect Companion In Her New Family’s Dog did get along beautifully from their very first day together, and they’ve been best friends ever since!

“It used to be that Alaska (my dog) would follow me everywhere, toilet and shower included. Now, there are two,” Gill stated in the story.

“They eat together, sleep together, play together and I’m pretty sure if Stitch was allowed outside they would also poop together,” she explained to Bored Panda.

In the end, Gill couldn’t be more thrilled that her two beloved pets are great pals, and she’s still extremely smitten with the newest family member.

“I haven’t had Stitch long, but she’s brought so much love with her,” she mentioned in the story.

What a wonderful ending! Not only did Gill get to give this special kitty a true forever home, Alaska the pup got a brand new best friend!