When it comes to cleanliness, no animal beats cats. They groom themselves for half a day, especially before going to sleep. They use their tongue to clean their coats, starting from the face and moving down to the legs, body, and tail at the end. Their special tongues have a texture that feels just like sandpaper. That’s an evolutionary trait that helps cats keep their coat clean and protects them from both high and low temperatures. But, why would a cat lick a human nose?

Momma cats clean their kittens from day one and teach them how to do it themselves. This behavior doesn’t only keep them clean – it also reinforces the social bonds in the family. Another behavior that cats like to do in your presence is rub themselves against on you or jump on you. When a cat or kitten jumps on you, it might begin to lick your nose. Why do they do that?

Well, the number one reason is exchanging scents. They don’t do this with just everyone – cats exchange scents only with those they care about.

Below you can see a list of other reasons why your cat licks your nose.

It Cares for You

A cat licking your nose is her way of telling you she cares for you. Cat moms spend a lot of time licking their kitten’s faces. While they do it for cleaning, of course, other purposes include bonding, exchanging scents, and getting them ready for nursing. If this process ended a bit early for a kitten, it might look to lick your nose. It’s just trying to re-create that connection with its mom that has been lost.

Licking is a special type of social bonding for cats. Moms and kittens socialize through licking, as do cat siblings. By transferring their smells on each other, cats mark others as “safe” and acceptable. It’s precisely the same when they do it with your face – they’re essentially bonding with you.

Unlike cats, humans produce salt through sweat and perspiration. Human noses are particularly salty and tasty for your cat. Remember – cats have a much more advanced sense of smell than us. They can smell the salt and might be attracted to lick your nose. This goes double if you just cooked a meal. The aroma stuck on your skin plus the salty flavor will be too much for your cat to pass up on.

Cleaning and grooming are the primary reasons why cats lick your nose. In cat groups, one cat does the licking and grooming, especially in areas that are hard to reach. So, in that way, the cat is doing the role of the groomer in the relationship.

When a cat transfers its scent through licking or any other behavior, it is marking its territory. By licking your nose, it’s essentially claiming its stake on you. This will almost surely happen if another animal enters your home. By licking your nose, your cat makes it known that you are its territory and belong to her. Jealous much? Yeah, cats are known to be jealous.

When cats love someone, whether it’s a human, another cat, or even a dog, they will show affection through licking. You know how we hug or kiss someone we like? Well, cats do it by licking. So, when your cat licks your nose, it’s a demonstration of affection. They won’t do it with just about anyone. Cats only lick people they love and enjoy. It’s a sure sign that your kitty loves you and feels safe and secure with you. Of course, it will expect some affection back when it does this. So, when your cat licks your nose, be ready to give some love back by cuddling and petting them.

Indicating That You’re a Part of Their Family

When your cat licks your nose, it is communicating with you that you are family. While it’s a pretty strange way of indicating your high status in its relationships, it’s still a way to show that you’re a very close friend.

Of course, getting attention is a big reason why a cat might lick your nose. If you’re too busy to notice them, they might do it. In that way, they hope to gain your attention and get some pets and cuddles.

When they’re in the mood, cats love to be cuddled and stroked. Since they can’t return the favor in the same way, they do it by licking. They love it when other cats lick them – the rough little tongue feels great on their fur. They assume that humans will enjoy the same sensation, so they might be licking your nose as a way to show appreciation for the pets.

Sometimes when a cat licks your nose, it’s a way of showing its under stress. This can happen when something big happens such as moving into a new home. Your kitten will surely be stressed by it, and will try to curb those feelings by licking your nose. It might do the same when you’re often upset or stressed. It’s a way of soothing those it loves. 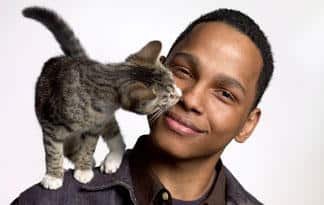 Can I Stop My Cat from Licking My Nose?

If you don’t like having your nose licked, it’s OK to stop your cat from doing it. You shouldn’t just push her away – instead, distract your cat with a toy or some food. If you just reject it harshly, you’ll send mixed signals to your cat. Imagine pushing away your partner when they try to kiss you – it’s similar to that.

If distraction doesn’t work, you can try by cuddling your cat. Or just walk away when it tries to do it – it’ll surely work.

However, you should allow a few licks every now and then. Remember that cats don’t lick the noses of just everyone they meet. They only do it with selected people, so if you want to be a part of its “crew”, you might as well let your cat do it.