ENGLAND – Veterinarians in London are saying that a cat who accidentally poisoned herself with brake fluid has miraculously been saved by a very unusual antidote: vodka.

The Blue Cross animal hospital, which is located in London, explained that 7-year-old cat Princess was taken in by her owner, Teresa Correira Maria, after the kitty was discovered covered in spilled brake fluid in a garden shed.

Veterinarians stated that Princess quickly became ill after attempting to clean the chemicals off her fur with her tongue. 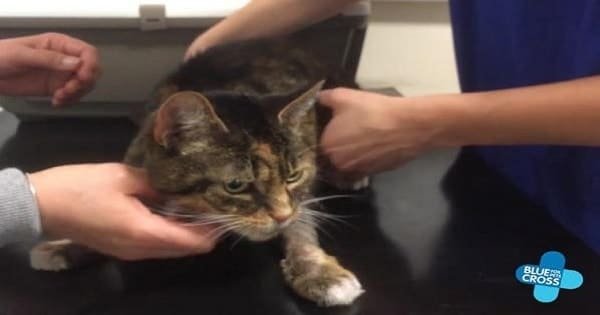 The hospital went on to explain how veterinarians rushed to the nearest liquor store to buy a bottle of high alcohol content vodka, which they said can counteract the effects of ethylene glycol, which is the poisonous chemical in brake fluid provided it’s given to a pet quickly after ingestion.

The vodka was given to Princess via an IV drip.

“Princess was in a really bad way and it was really touch and go,” veterinarian Heather Loh noted. “Household products containing this type of chemical are very dangerous to pets and Princess needed 24-hour intensive care.”

“Pets should never be given alcohol but this was the only solution to prevent the poison from taking over and killing her,” Loh stated. “She was a bit worse the wear for several days afterward but we were relieved blood tests showed the effects of the drip were working and the poison would no longer be fatal.”

Maria mentioned that Princess has since been able to come home and is recovering from her ordeal.

“I was so worried about her but now relieved and happy she is making a full recovery and was well enough to come home,” she said. “The treatment did sound unusual when vets explained what was happening, but I just wanted Princess to survive. I will make sure there is no way she can get into this kind of trouble again.”