CALIFORNIA – A cat was found roaming the Phelan area on Wednesday after it apparently survived the flames from the Blue Cut Fire.

The cat was spotted walking among the many destroyed structures in an area just off Highway 138 and Hess Road, where the fire swept through on Wednesday. 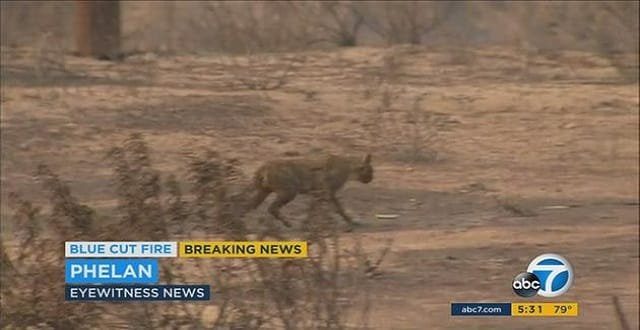 In one spot where there was once a home, all that remained there in the rubble was a charred refrigerator, the front stairs and a bathtub.

It was unknown whether or not the cat belonged to anyone, but it was seen with all of its fur visibly burned off.

Coincidentally, animal control officers were in the area to help households with pets who needed evacuating. They put food and water out for the cat, however, they were unable to trap it.

Firefighters were unable to provide any further details regarding all of the damage as they continued to focus on trying to fight the flames.