UNITED KINGDOM – A family has been left completely devastated after their beloved cat suffered horrific injuries in what they believe was a cruel attack.

The tuxedo cat named Rosie was found by her owner Bill Robson under his car in the early hours of Thursday morning.

Mr. Robson, who is 52, of St Clement’s Street, Blackburn, claims Rosie had the skin ripped off her hindquarters and the lining of her stomach ripped leaving her “intestines hanging out”.

She has been left “traumatized and unable to eat” since the incident, he went on to say.

Mr. Robson has taken it upon himself to warn other owners to be careful about letting their cats out. 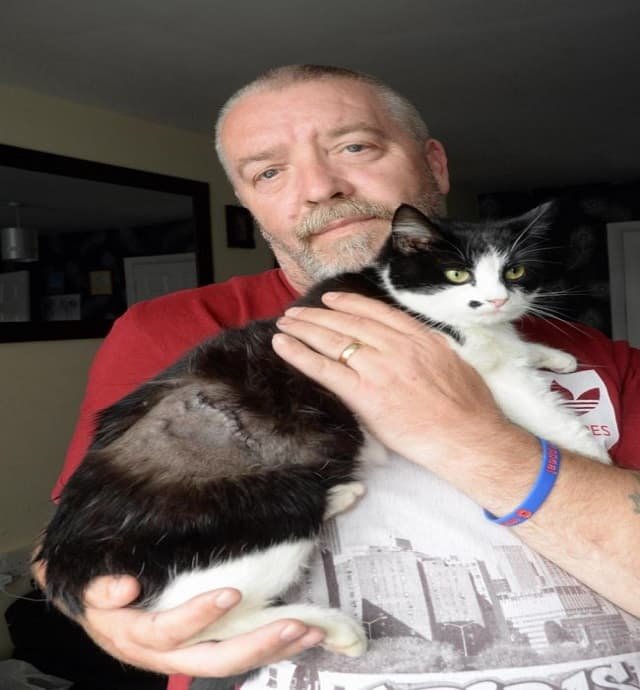 The full-time carer stated: “She crawled from underneath the car and was screaming. I picked her up and saw all the skin had been ripped off. You could see the muscle on her hind. She had not been run over and at first, I thought she had got caught jumping over a fence.

“I took her to the vet and he phoned me up and said ‘I have been a vet for a long time and I never saw a cat with injuries like this’.

“He said it was unlikely she had been knocked over because she did not have any broken bones and there are no bite marks.”

Mr. Robson added that the lining of her stomach had been ripped and her intestines were hanging out.

“I think someone has got hold of her. There is more to it – a cat cannot just get these kinds of injuries.

“I have no idea who could have done it. I think she was getting ready for the pot. It’s cruelty beyond cruelty.

“I’m so disgusted. This should never happen to any cat.”

Mr. Robson explained that they bought Rosie as a kitten after his dog Silky lost her puppies.

“We are all in bits. I have a disabled son that loves her,” he stated.

The cat is on medication and having to be hand fed by the family.

“She’s very distressed. It’s such a shame, she is such a loving cat and is part of our family. It has devastated everybody,” he stated.

“I hope karma gets whoever did it.”

Mr. Robson also advised people in the area to be careful about letting their cats out particularly in the evening.

A spokeswoman for Chris Mason Veterinary Surgery in Bamber Bridge explained that they had treated the cat which had injuries to its abdomen and legs.

“It is one of the worst we have seen. They were significant injuries,” she concluded.