The Boulder County Jail seems to have two new residents, and they are both quite scary characters.

If you happen to be a mouse, that is.

Charlie and Adra are an adorable pair of cats — nature’s terminators who were brought in to hunt mice and scare away rabbits at the jail’s organic garden.

So far, they are doing exceedingly well.

“The kitten is the one that lies to mouse,” Sgt. Paul Heger explained. “The other one is OK. They catch mice and keep them out of the plants, so we don’t have to use chemicals.”

Both rescue cats, Charlie and Adra replaced Sarge, who once patrolled the garden and pretty much the entire jail grounds and surrounding area for many years. Sarge’s initial replacement,whose name is Asher, didn’t take to jail life and ran off, but, so far, the new cats seem to like it.

Sarge came to an untimely end just about a year ago — no one is sure exactly how, but jail staff are pretty sure he was either hit by a car or attacked by some animal — and inmates set up a memorial plot at the front of the garden which bears his name and someone hung a rosary on it.

The cats seem to be a perennial favorite among the rotating inmates.

“Those guys are really fond of those cats,” Heger stated. “One inmate got in trouble and couldn’t work in the garden. He kept asking about the cat. He didn’t care about anything else. That’s a big step for some of these guys.”

Heger explained that working in the garden is a good experience for the inmates lucky enough to get picked for the job. A spot in the jail garden crew is highly cherished among inmates. About four people get to tend to it full-time among a daily population above 500 inmates.

The inmates work approximately 12 hours a day and receive instruction from master gardeners who volunteer their time and expertise.

“It opens up inmates and gives them something they are learning,” Heger stated. “It’s something they can take with them instead of bad experiences and bad ideas from other inmates.”

Among them is a man named Andrew Johnson, who has been in jail for about a year on a probation violation stemming from misdemeanor domestic violence conviction. He’ll be there just until this coming October, just about when harvest comes in. 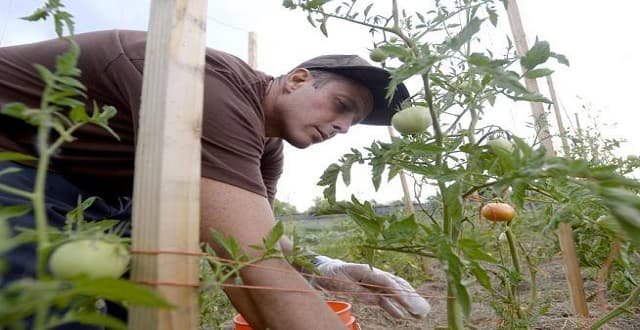 He explained that he has a pretty extensive criminal record, and although he doesn’t hold the criminal justice system in high regard, he does appreciate the opportunity the jail has afforded him.

If you ask Johnson what his favorite vegetables to grow are, he pauses, cracks a smile and takes a moment to think about it.

He walks around the garden, going on about a list of vegetables and plants he’s become acquainted with — Armenian cucumbers, tomatillos, cabbage, Brussels sprouts, Jerusalem artichokes, watermelon and about a dozen others.

“We feel like we took it to another level this year,” Johnson stated. “But you are dealing with Mother Nature, so it’s a challenge.”

And they actually have taken it to another level.

The garden yielded approximately 13,000 pounds of produce last year and this year will likely produce more than 20,000 pounds. Inmates are cultivating more of the grounds, and volunteers have started planting flowers.

Inmates also installed a fountain and stone work, and the jail recently received the official permission to build a greenhouse on an area currently flush with tomatillos. Inmates will use it, ultimately, to sprout seeds, something currently done at an outside nursery.

Heger explained that the contractor that runs the jail buys the produce from the county, and the produce they don’t want gets donated to charity. In the end, he stated, it saves taxpayers money.

Its true purpose, however, is to give inmates much like Johnson — who has been in trouble since he was about 10 years old — something real to be proud of, Heger said.

And in the end, keep them from coming back.

“You never think you’d have a big tough guy get teary-eyed when he gets to see a cat,” he stated. “It opens them up to ideas and people and the experience. They get to see the yield that they brought with their hard labor.”