SALISBURY, MASSACHUSETTS — A Salisbury resident by the name of Randee Michaud was worried — as she was leaving for work late last month, her cat August hadn’t returned from his morning stroll. That was very unusual for him, and a sign of trouble.

When he finally crawled back home later on that same day, it was a horrifying sight. A metal leg trap was completely clasped around his stomach area, and August was crying and limping, in intense pain.

That particular kind of trap has been illegal in Massachusetts for nearly 20 years.

He was immediately rushed to a local animal hospital, where after hours of surgery the trap was delicately removed. August did survive, but he had suffered serious injuries and is still currently recovering, according to Liz Pease, director of the Merrimack River Feline Rescue Society. 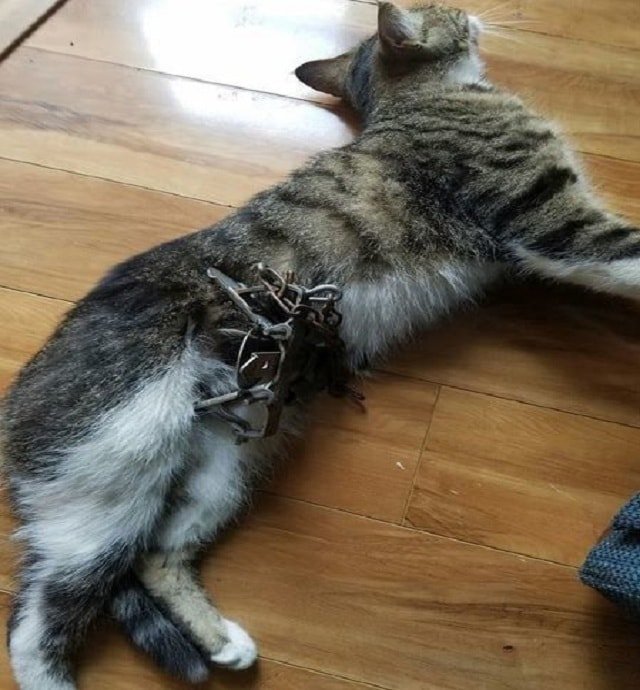 “I was certainly horrified to hear about this,” stated Pease, whose organization stepped forward to help Michaud pay her veterinarian bills. “There’s no reason to have these kinds of traps in residential areas.”

August isn’t the only pet that has been caught in these illegal traps in recent years, according to the Massachusetts Society for the Prevention of Cruelty to Animals. Just about every year one pet or another is reported caught and often killed in leg hold traps, and it’s believed that there are more that go unreported.

The incident has drawn attention from the MSPCA, as there are currently two bills in the state Legislature which would relax the ban on leg traps, according to the MSPCA’s legislative agent Laura Hagan.

“Every session we see a number of bills that look to walk back the restrictions put in place under the Wildlife Protection Act,” she stated.

The Wildlife Protection Act was a ballot question passed back in 1996 by Massachusetts voters. Its primary goal was to ban the use of mechanical traps which are designed to snap shut on the animal, killing or at least, immobilizing it. The use of these traps carries with it a fine of $300 to $1,000, and up to 6 months in prison. Incidents are investigated by the state’s Environmental Police.

Hagan explained that the MSPCA is opposed to changing the ban on traps, and went on to say that August’s encounter with one is a good example of why they should be forbidden.

“Our concern is that it’s non-targeted wildlife, it’s domestic animals that fall victim to them,” she noted.

Please note that children could also stumble onto such a trap.

As far as August is concerned, Pease insisted he is now an indoor cat, although he still longs to explore the outdoor world.